This 8 day exploration of Egypt includes a 4 day & 3 night cruise along the Nile which allows adequate time to thoroughly explore the historic sights of Abu Simbel. Domestic flights offer spectacular views of various temples and mosques and personal assistance between airports and hotels will prove to you the exemplary service available through our trusted guides in Egypt. 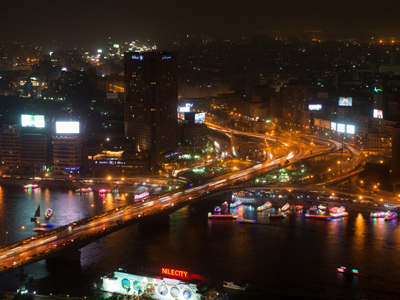 Arrive at Cairo International Airport where you will be met and assisted by a representative with your transfer to your hotel.

Cairo, Egypt’s sprawling capital and Africa's largest city, is set on the Nile River. Like other part of Egypt, Cairo's charm stems from its history. Spend time in Cairo to explore the Tahrir Square and the Egyptian Museum, with artifacts of royal mummies and King Tutankhamun relics. Visit the nearby, Giza - the site of the iconic pyramids and Great Sphinx. Relax over a mint tea in a café or wander the quiet back alleys to explore the mix of eras and styles of the city.

After breakfast at your hotel, you'll begin your full day of sightseeing in Saqqara, an ancient Egyptian burial ground housing the world's oldest standing stone structure- the Step Pyramid. Continue your tour to visit the Ancient Great Pyramids of Giza. These are the largest remaining man-made structure of the seven wonders of the ancient world and an Iconic site known throughout the world.

Return to your hotel to freshen up before enjoying dinner with a local family this evening. 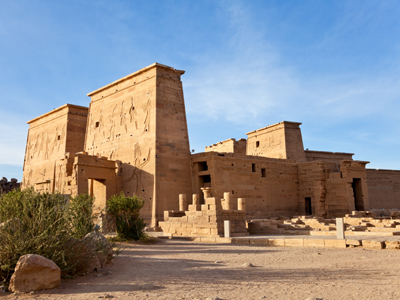 After checking out, you will be picked up at your hotel in Cairo and transferred to the airport for your domestic flight to Abu Simbel. (This service is on a private basis.)

The Two Temples of Abu Simbel

As one of the few ancient Egyptian sites which largely escaped damage by past invaders, the interiors of Abu Simbel's temples are astounding. The scale of the buildings and their and details will leave you in awe. They reflect the glory and grandeur of the new Kingdom. The Temple of Ramesses II was dedicated to the four universal gods Ptah, Re-Her-Akhtey, Amun-Re, and to Ramesses II himself. The Temple of Queen Nefertari is also Called Temple of Hathor who was the wife of the Sun God so in a symbolic way, the two Temples, that of Ramesses II and that of Nefertari, bring Ramesses II, Nefertari, Hathor, and the Sun God together as one.

Located on the northern end of the First Cataract, Aswan's history is very rich as it was a garrison town for the military campaigns against Nubia. Today, it has more of a laid back appeal and is a great resting spot to enjoy before embarking on the Nile River. 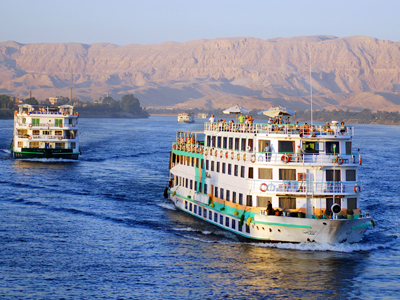 Time to embark on a new adventure! After checking out from your hotel, you will take a boat ride to Egilika Island to visit the Philae Temple. The temple is considered one of the most beautiful temples in Egypt! Your guide will show you around the temple and give you free time to explore on your own.

After your exploration, transfer over to your Nile Cruise. This Afternoon, you will have lunch while crossing the Nile River to reach the Nubian Village. In the village, you will get to visit a local school and hospital. Have the chance to drink tea at a local home, chat with the kids/locals, and be fully submerged in their culture.

The Nile River, originating in Burundi flows northwards through Egypt and is the cradle of civilization in the region. A cruise up the Nile includes highlights such as Aswa and the East and West banks of Luxor. Explore endless temples and ruins as you sail down the river.

Rise and shine! Enjoy breakfast on board while you sail to Kom Ombo to visit the unusual double temple dedicated to the crocodile god Sobek and Haroeris. While you admire the beautiful scenery of the Nile, you will sail to Edfu. En-route you will have lunch before discovering the several temples built in the Ptolemaic period. There you will see the huge temple dedicated to the god Horus by horse carriage and a tour with your guide. You will get to visit the colorful local bazaars where you can find a variety of beautiful souvenirs.

After the tour, enjoy dinner on the cruise, relax, and enjoy the ride.

Enjoy a yummy breakfast on the cruise as you sail to your next destination. Today you will visit Valley of the Kings, Queen Hatshepsut Temple, and Colossi of Memnon & Karnak Temples. You will start the day by visiting the West Bank of Luxor, with your first stop at Valley of the Kings. For generations, Pharaohs and Nobles were buried in crypts that would cut into the cliffs. You will then visit Queen Hatshepsut Temple located in the eastern face of the Theban Mountain. Finally, visit the Colossi of Memnon, these two gigantic statues represent King Amenophis III seated on a cube-shaped throne.

After lunch, visit the East Bank of Luxor which includes the Karnak & Luxor Temples, the largest place of worship ever built, a vast open-air museum, and the largest ancient religious site in the world. Continue onto Luxor Temple, dedicated to the Theban triad Amun, Mut, and Khonsu. When your tour is done, enjoy dinner and relaxation in the cruise.

Unfortunately, it is time to disembark from your Nile Cruise. Enjoy your last breakfast on the Nile River while you take in all of its beauty and ancient culture. After breakfast, disembark from the boat and transfer over to Luxor Airport for your domestic flight to Cairo. Upon arrival, you will be transferred to your Cairo Hotel. The rest of the evening is free at your own leisure. 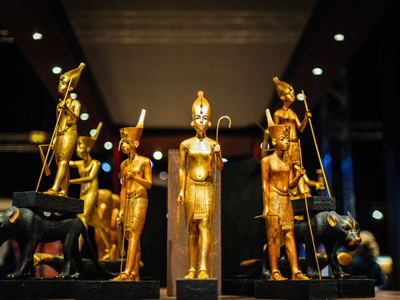 This morning, you will explore the rich history of Cairo and Egypt's fabled past. To begin, you will visit the Egyptian Museum of Antiquities. The museum has a remarkable collection of antiquities including the most splendid collection of King Tutankhamun alongside many other fascinating artifacts. It contains over 180,000 pieces of antiquities on display and reflects 5,000 years of Egyptian history.

Next, journey into the captivating Old Cairo as you visit the Hanging Church and the Ben Ezra Synagogue and end the day in the chaos of Cairo’s Khan el Khalili bazaar. Here, you will have the opportunity to bargain with vendors, take in the aromas of the spices and get lost in the winding narrow alleyways. After your city tour, return to the hotel to spend the remainder of the day at your leisure. (This service is on a private basis.)

Although your adventure must come to an end today, you will be leaving with new friends, amazing experiences and memories to cherish for the rest of your life. Once you have checked out of your hotel in Cairo, you will be met by your driver and transferred to the airport in good time to board your international departure flight.

We wish you safe and happy travels home! (This service is on a private basis.)

The stunning Le Meridien Pyramids Hotel and Spa, nestled between the city and the wilderness, boasts unparalleled views of the majestic, ancient splendor of the Giza Pyramids. A mere glance out your window reveals the secrets of one of the Seven Wonders of the World. Le Meridien Pyramids Hotel and Spa is surrounded by luxuriantly landscaped gardens, providing a respite of greenery amidst golden sands. With a peerless choice of restaurants and cuisines, a Royal Club floor, wireless connectivity, and a magnificent swimming pool and spa amenities, this property is conveniently located only 20 minutes from Cairo’s city center and is the ideal place to explore the ancient mysteries of Egypt

Pleasing guests with a spectacular view over the river Nile from the 230 elegant rooms, suites and villas, the Mövenpick resort Aswan offers a unique location elephantine island. It lies within walking distance of the historical Island, touristic sites, central station and cultural hotspots. The hotel is easily reached only 20 minutes from Aswan Airport and 5 minutes from Aswan rail way station.

Overlooking the magnificent River Nile, Conrad Cairo is set in the heart of bustling downtown. This award-winning event and business hotel offer city explorers premium rooms, elegant dining and 24-hour entertainment with a glamorous International Casino. Conrad Cairo offers spectacular River Nile views from every room. Enjoy easy access to city center businesses, as well as legendary attractions such as the Sphinx and Giza Pyramid. This landmark hotel boasts 11 flexible meeting and banquet rooms, including one of the city's largest ballrooms. Plan your dream destination wedding, a corporate event or a conference; our dedicated Conrad team offers the experience and facilities to meet all of your needs. Six outstanding restaurants and bars offer round the clock dining and entertainment. Visit the International Casino with a cocktail in hand and experience the glitz and glamour of Stage One bar.

*Pricing is based on two persons traveling together, based on availability, subject to change.

Unparallelled Customer Service
As dedicated travel specialists, we are here to help you plan the perfect trip. We're with you from the beginning, during the crucial planning stages, throughout your trip in case anything comes up, and afterwards to make sure everything went perfectly. If anything were to go wrong during your trip (missed/delayed flights, etc.), we and our local in‐country partners are here for you.
Hand‐crafted Trips
While we have sample itineraries to help you create the perfect trip, we encourage you to travel at your own pace with a custom itinerary ‐ or simply book accommodation and excursions to travel with full flexibility. We also give you access to an amazing product line that would be very difficult to find otherwise.
Social Responsibility
Our trips directly benefit local communities through a variety of educational, environmental, and cultural initiatives. Additionally, all of our partners have been qualified as upholding a level of service that we truly stand behind. We strive to work exclusively with like‐minded partners who are committed to making sure tourism does not have a negative impact on destinations.

Our entire team is dedicated to making this custom journey come true. Request a free quote by filling out the form and please share any details to help us customize this perfect trip just for you.

Can’t wait another minute? We understand, call us directly at (866) 577-2462 and speak with one of our extraordinary travel specialists.

... Your information is processing.
There was an issue sending your information.
Please try again or call (866) 577-2462 or email travel@globalbaseamps.com
This is just one of many authentic travel experiences offered by Global Basecamps. If you are interested in more unique destinations to Egypt with unprecedented planning and extraordinary service visit our main Egypt tours page to browse other sample trips.
© 2021 Copyright - Global Basecamps. All rights reserved - globalbasecamps.com - Privacy Policy - Site Map