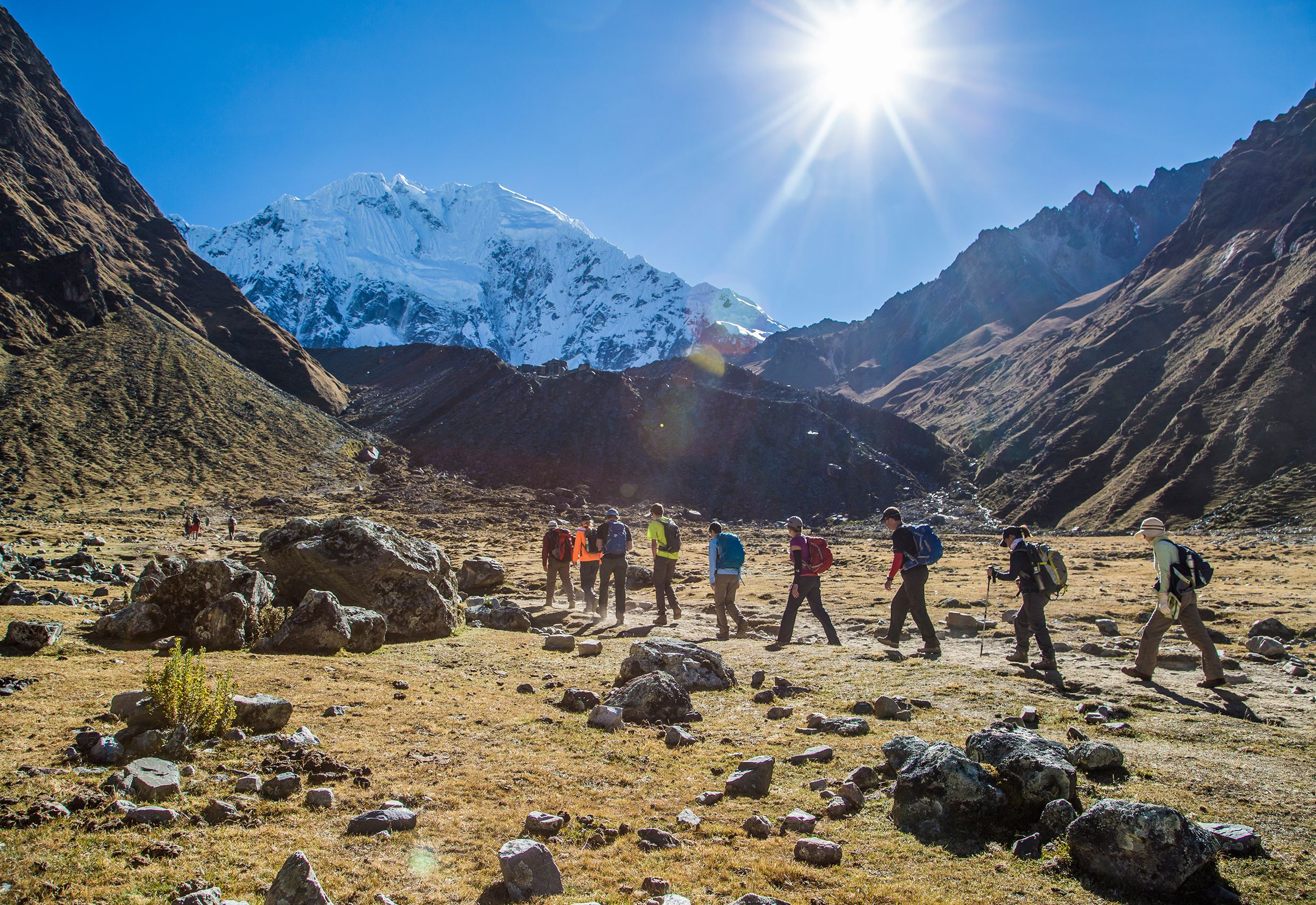 Drawing visitors from every corner of the world, the mountains of Peru offer an absolutely unparalleled combination of natural beauty, cultural heritage, and opportunities for physical challenge and accomplishment. Come along as we explore the innumerable wonders the Peruvian Andes have to offer!

Beyond just Peru, where are the Andes Mountains located? The longest continental mountain range in the world, the Andes stretch basically the entire length of South America down its wetsern coast. Starting in Venezuela at their northernmost, the Andes extend south through Colombia, Ecuador, Peru, Bolivia, Argentina and Chile at a total length of 7,000 km (4,300 mi)!

Though the Andes are indeed the general name for the main mountain range in Peru, they have a number of ways in which they are described: by groups that run the entire length of South America, by geographic region within Peru itself, and by the name of many sub-ranges.

The Peru Andes are considered to be in the Central group including Bolivia, between the Northern (Venezuela, Colombia, and Ecuador) and Southern (Argentina and Chile) groups. The Andes highest peak, Argentina’s Aconcagua (6,961m / 22,841’), lies toward the southern end of the range, two thirds of the way down the continent. Just behind Asia’s Himalayas, the Andes is the second highest mountain range in the world at an average height of 4,000m / 13,000’. The Andes are one of the older mountain ranges, formed as the Nazca and Antarctic Plates have subducted under the South American Plate.

Peru’s geography has many ways of being classified and described, with one being the most straightforward: the three general zones of “La Costa” (the Western coast, about 10% of Peru’s land area), “La Sierra” (the central Andean Highlands, about 30%) and “La Selva” (the eastern Amazonian Forest, about 60%).

La Costa is bleak and rocky as it forms the foothills of the Andes, though it is watered by numerous rivers and ancient agricultural canals that cross the area. Plant life can burst forth if the right timing and amount of rain comes, though growing populations of Peruvians (this region is where the capital, Lima, is found, and over half of Peru’s population lives here) are putting increasing stress on this fragile ecosystem. Up and over La Sierra, La Selva is rich in biodiversity as the forest contributes to the mighty Amazon River watershed. Only a tenth of Peru’s population lives here, where travelers can partake in amazing wildlife observation, tour the forest canopy, and take in the rainforest experience by canoe.


And finally, La Sierra - in Peru, mountain ranges are ubiquitous and complex, and there are dozens of smaller named ranges that make up the Andes in this country. There is rich native history covering all regions in Peru; nowhere in the country is this more evident than in the exquisite archaeology covering La Sierra. Far beyond just dramatic terrain, mountains in Peru represent a homeland for striking cultures old and new, habitat for intriguing wildlife, and endless opportunities for adventure.

Peru’s Andes do in fact have many sub-ranges, including the Huaguruncho, the Raura, the Huanzo, the Vilcabamba (read on to learn more …) and many more.

In Peru, mountains of significant elevation are everywhere; in fact, Peru some of the highest concentrations of peaks over 4,000 and 5,000 meters in the entire world! As far as natural and cultural splendor in the Andes mountains, Peru truly has it all. Pumas, the big cat found throughout North and South America, can be found high in the Andes, and the Andean bear will hunt at the edges of alpine forests. The vizcachas (rabbit-like in appearance) and Andean deer are other mammals found in the highlands.


The Andean condor, the world’s largest flying bird and subject of much Andean mythology, can be seen soaring with its massive ten foot wingspan as it scavenges for food. To the Incas, it was considered to be related to the sun deity as a ruler of the upper world. The red-coated tungki, Peru’s national bird, continues to be celebrated in contemporary times in art as it was by the Incas. Peru boasts four distant relatives to the camel: vicuñas, guanacos, alpacas, and llamas, the most common. The latter two are domesticated, while the former two are only found in the wild.

The ancient Peruvian Nazca and Inca cultures left a record of their civilizations through the powerful testimony of their architecture. The Nazca Lines are located outside of Lima, and are a mysterious group of hundreds of massive geoglyphs etched into the ground. Dated to 500 BCE to 500 CE, they are large that they are best viewed from aircraft or nearby hilltops.


The Incas created during their 1400s - 1500s CE empire the sites that make the Peruvian mountains, including the Cusco highlands, including the Sacred Valley, the most famous part of the country: with mind-blowing ruins to be found at Machu Picchu and other nearby sites. The Inca Trail, as well as the Lares Trek and Salkantay Trail provide incredible scenery on the way to Machu Picchu, one of the New Seven Wonders of the World. The trek to Machu Picchu’s massive ruins at 2,430 m / 7,972 ft is a community affair, with travelers and local Quechua porters sharing the way to the “Lost City”. The dry-fit stone architecture here and throughout the area features blocks that have up to 12 angles and often weigh 50 tons!

The Salkantay Trek offers awe-inspiring views of Salkantay Peak itself, the highest in the Vilcabamba Range at 6,271 m / 20,574 ft on its alternate route to Machu Picchu. The Choquequirao Trek takes you past the unique and lesser-visited ruins of the same name on yet another trail to Machu Picchu, a very worthy alternative to some of the more traveled routes.

Also nearby is the Apu (guardian spirit of the mountain) Trek on Vilcanota’s Cordillera. Pack llamas and horses carry the trekking gear on the trail between restful evenings at tambos, beautiful and well appointed lodges, with locals’ authentic music to help travelers unwind. Further south, the mountains of Peru offer two more unique destinations: the Baroque architecture of the colonial town of Arequipa, and the chance to visit the floating islands of the Uros people on Lake Titicaca, the world’s highest navigable lake.

Whether you’re looking to rough it or travel in style, Peru tours are our specialty and we can put together the perfect trip for you or your group. The Peruvian Andes are a region like no other in the world, so let us help get you there!